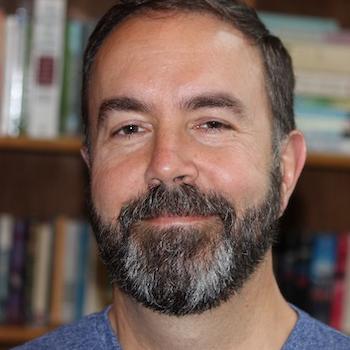 Hugh backed into his career in marketing and business strategy from his intended career of . . . well, let’s be honest, Hugh never intended to have a “career”. He wanted to be a writer, but he also wanted to eat, dress warmly and keep his marriage intact—all things many writers have trouble with. So after receiving his MFA, he began teaching at Emerson College in Boston, MA. When he needed more money (to support his responsible-married- adult-life addiction) he took on some work in Emerson’s Continuing Education Division, where he quickly became Director of Academic Programs and led the Continuing Ed Division’s revenue growth of 350% in three years.

Seeing as he had become a sell-out, Hugh figured he might as well go make some real money in the real world. Over many years, Hugh worked for a financial services enterprise (aka “bank”), a federal government contract-training company, and Lesley University, where he served as VP of Marketing & Strategic Initiatives until 2005. In those years, he learned many valuable lessons, including:

How a job in “marketing” could become a job in “sales” in less than a day. How even one whiff of paranoia can take an entire organization’s focus off the customer, and thereby bring every imagined fear to reality. How working longer hours and e-mailing more people is often mistaken for evidence of talent or results. How almost everyone really does care about doing a good job, even when they talk like they don’t.

Hugh learned other lessons, including how to develop and execute business strategy, communicate with customers, create meaningful partnerships and acquisitions, lead large teams and improve profitability, blah, blah, blah.
Perhaps most germane to TEG, Lesley University gave Hugh a chance to interact with hundreds if not thousands of K-12 teachers, principals and administrators throughout the U.S. He developed a deep appreciation for the unique challenges of teaching in a public K-12 classroom, while also having a chance to see how best practices in teacher preparation, school leadership and curriculum development could truly transform the learning environment for students.

In 2005, Hugh left Lesley to become the Vice President of Business Development and External Relations for Laureate Education, Inc., former Sylvan Learning Systems, one of the largest world-wide providers of higher education. Later that same year, Hugh and his wife had their first child. After more than 70 round-trip plane rides in only 18 months, Hugh knew that the time had come to make a change in his career so as not to miss the changes in his family (cue Harry Chapin!). With his wife pregnant with their second child, Hugh left Laureate in 2007.

Today, Hugh describes himself as “allergic” to large organizations (to be fair, they are probably allergic to him as well). Through projects like NOTA, iPASOS and Parents K-12, Hugh is more convinced than ever of the potential to disruptively innovate within the K-12 system in order to improve how kids learn. He enjoys working very near his family on a daily basis, having less than 100 e-mails a day, and working in a focused and productive way on Projects-That-Can-No-Will-Change-The-World.