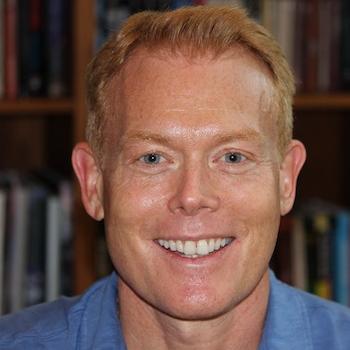 Clyde suffers from an acute form of professional attention deficit, otherwise known as iPAD. This is due, primarily, to his love for wildly divergent ideas and fields of studies. First and foremost is his love for his family. After that, and in no particular order – architecture, design, physical computing, art + code, burned cheese, the Marx Brothers, Will Rogers and Leadbelly, play, the future, science books, the smell of solder and fresh dug up soil.

Good luck in trying to detect a pattern. If there is one, it is simply this – Clyde loves to learn and to make things and has a knack for knowing what lies just around the corner.

After several fits and starts, Clyde’s career finally kicked into gear after an interview he gave with the founder of Global Schoolhouse for a cable technology show (think CNET with a quarter of the budget). Halfway through the interview, Clyde had made up his mind. He knew this is what he wanted to do for the rest of his life. He quit his day job teaching design at a local college, quit the TV show and went to work for Global SchoolHouse. Within months, Clyde was building learning communities in Uganda, Ghana and South Africa.

Within several years, he helped develop some of the most influential projects in ed tech including CyberFair, World Links for Development with the World Bank, and ThinkQuest. It was here that Clyde learned what kids could actually accomplish given the right platform, the right tools and the freedom to create. Those principles for collaborative design became the foundation for the “Harnessing the Power of the Web” which he co-authored with Al Rogers and was distributed to over a quarter of a million students worldwide.

The grant money came to an end and the promise of fame and fortune drew Clyde to Silicon Valley. As Vice President of Product Design at ezBoard, Clyde helped grow the online community from 1 million to 7 million members within a year using the same strategies he used working with learning communities in Africa. As Senior Art Director for Lightspan, Clyde helped pioneer the development of educational online games with Sony and Disney. But for all the energy and enthusiasm, expense budgets out of control and business plans written on the back of matchbooks, Clyde grew restless and began to miss the simpler days of working on projects with meaning.

In 2001, as the dot.com bubble popped, Clyde headed back to the classroom. Taking all that he had learned as a product designer, tech leader and community builder, Clyde set out to change how students learned online. As VP of Business Architecture at Laureate Education, Clyde was responsible for defining the overall student experience. For six years, Clyde helped reorganize all student-facing agencies around the needs of the students, designed and implemented systems that supported the entire student lifecycle, and helped integrate Universities from around the world into a unified platform. But, once again, Clyde grew restless. In the process of defining enterprise level systems and processes, he felt disconnected from those he set out to serve.

So in 2007, after a conversation with his friend and future business partner, Hugh Norwood, Clyde thankfully said goodbye to the corporate world and set out on a new adventure; one that he believes can help change the way kids learn.